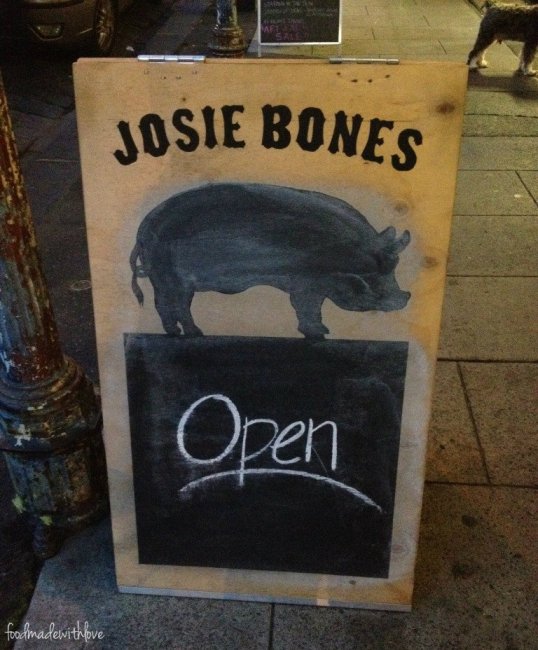 This would be my second visit to Josie Bones but this time, we had the mr’s cousin join us so we could try more of the menu, so I was really excited. I have to admit, we wanted to have Huxtaburger that night, but silly me didn’t check their opening times and they were closed on Mondays. But it was like a blessing in disguise, cause we got to dine at Josie Bones again!

We were first introduced to Josie Bones by my mr’s client who gave raving reviews about the food and the vast number of different beer/alcohol they offer. This comes as no surprise, because it is opened by Chris Badenoch and Julia Jenkins, who were contestents of Masterchef Season 1 and Chris was known as the beer merchant. And the Mr purchased Chris’ cook book because he loved how he uses the whole animal when he cooks, like the whole pig, sheep or cow. Nothing goes to waste, which is awesome!

Absoutely love the outlook of the restaurant. It has a long bench top which customers can sit and enjoy the food and have a chat with the most friendly staff! Josie Bones is a tapas style restaurant that serves heaps of unusual but delicious food. It’s definitely not your usual dishes, but trust me they are awesome! There was alot of oohs and ahhs the moment the plates were placed on the table. Just couldn’t wait to dive in, but as usual, our cameras ate first. hehe

This, ladies and gentlemen, is the beverage menu. haha Yes. It’s that thick. They do bring in lots and lots of beers from all around the world, and most of which we’ve never seen or heard. The staff were all very knowledgeable about every single beer and they are more than willing to help if you get lost in the ocean of beer choices!

The mr told him what he usually likes (which is whiskey, of course) and the staff actually recommended a beer that tasted like whiskey and totally suited his taste buds! I, on the other hand, prefer something fruity. And the melon gibson, which was more on the sweet side and tones of watermelon, was highly recommended. It was delicious and not overly sweet! Kong Seng had the raspberry beer which was really yum as well!

We ordered two entrees to start our meals. One of which is the crackling of the day ($4). Every single piece of crackling was super crispy and its served with a side of seas salt which was so good! It went from the a plate full of crackling to an empty plate in less than 10 minutes. And yes, we ordered a second serve of it as well! haha Whoops!

Our second entree was one of the specials of the day : mini sliders with braised pork belly and kimchi in freshly baked brioche buns. These were the BOMB! SO good! I could just have that all night long to be honest! The brioche buns were freshly made and cotton soft! and the braised pork. oh what can I say? Melt-in-your mouth goodness! The kimchi added a crunchy texture to the slider and also cut through the richness. AMAZING!

Yes. It was really really good. Would love one now. hehe

hehe that’s how small it was. Small but mighty, I have to say. hehe Can you tell how much I really like it?

So then come our mains. We ordered three to start with and the staff recommended we order a side of greens to balance our meal out. hehe It totally slipped my mind to order some greens! hehe Oops. Totally focused on all the meat dishes! But can you blame me? hehe I got overly excited when I saw the menu.

Our first main was stuffed trotters with black pudding, with braised lentils and crispy pigs ear. As you already know, I love dishes with different textures and this just ticks all the boxes in my list! The soft and tender pig trotters that were stuffed with black pudding was tasty but not overpowering! I was a little apprehensive about the black pudding at first, cos it wasn’t something I usually enjoy. But this was really good. The deep friend pigs ear was so good! I saved that to the very last bit and had it all slowly, savouring every bite. *crunch*

This was my favourite dish of the night! We had it the first time we came as well. But had to have it again, cause it was so good! It’s rolled pigs head with sauce gribiche and crackling. Yes. More crackling! haha This is just one of the examples of not wasting any part of the animal! In fact, the meat from the pig’s head (for example pork cheeks) are the best bits! Super tender and super tasty. Melt-in-your-mouth kind of goodness. The super crunchy outer layer covers the most tender piece of meat (and fat). But I’m really glad we shared, cos it might get a bit too rich. But the sauce gribiche helps cut through the richness as it is a tad bit sour and tangy.

This zucchini salad with fiore di burrata, toasted almonds, grapefruit and saffron pickled shallots was recommended by the staff and I must say it was a perfect in between dish to be served as it was really refreshing and acted almost like a palette cleanser, preparing us for our final main dish. Fior di burrata is actually an italian cheese made of mozzarella and cream. The texture was exactly like a fresh mozzarella. So good!

The mr’s cousin have never had rabbit, so he requested for us to try this dish : Braised rabbit with chorizo and creme fraiche jus. The rabbit pieces were really tender and the chorizo added a mild spiciness which was good! and what’s better? The staff offered us a basket of bread to go with the gravy! DUNK!

Of course, we couldn’t leave without having sweets. Although we were all quite full, but like the mr says. There is always space for dessert! hehe When we looked at the dessert menu, our choice was made up almost immediately. haha

Pear tarte tartin with beer caramel and bourbon & raisin ice cream. The puff pastry was still crispy-crunchy and the pear was really tender, all these yumminess covered with an intense beer caramel which was sticky and gooey. This hot tartin was paired perfectly with a boozy bourbon and raisin icecream. It was so good! Although we did wait 30 minutes for it, but I think it’s well-worth the wait! hehe

So after all the rich and delicious food, we were of course super stuffed but we had happy bellies at the end of the night! hehe I have to say that every single dish was really well balanced in terms of flavour and textures. Almost each dish had a a mix of tenderness and crunch! Plus you pair them with beers of your choice! Definitely really happy we went there that night.

So go ahead,  hold on to those hooves and give them a push! I know you would want to! (: