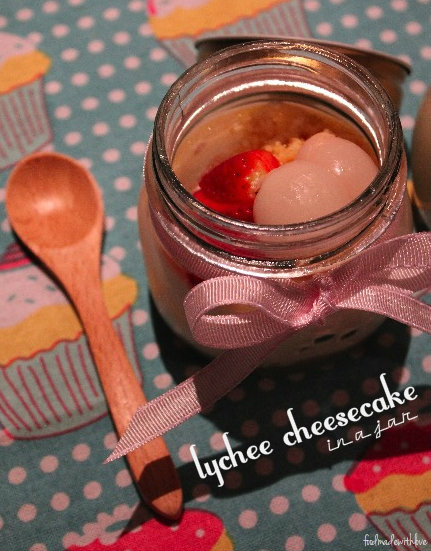 I’ve been wanting to do this for the longest time. Making a dessert in a jar that is. I’ve been really amused by the whole concept and also totally in love with how the desserts turn out. You don’t even need to decorate it much, just place a ribbon around the mouth of the jar and place it with a spoon, viola! (: You have a beautiful looking dessert on the table. Perfect for a dinner party or even gifts for friends!

Lychees are definitely one of my favourite fruits. But it’s so difficult to find the fresh version here, even if they sell it, it’s so crazy expensive! haha So I always have a tin of lychees sitting in my pantry. (: I have to admit, i’ve not had cream cheese with lychees before, but I suppose, it should go well with a sweet fruit puree. Right? hehe So here goes nothing!

I did a bit of research and found a recipe that sounded easy and the product looked absolutely gorgeous, so I just had to give it a try. The only downside to this recipe? Is that I have to wait for the cheesecake to set, before being able to indulge in them! haha But I am a firm believer of delayed gratification! This is one dessert that is definitely worth the wait! (:

Oh yes! I did add a bit of lychee liquor, which I always have in my pantry, just to make it a little boozy! hehe But definitely not enough to taste it. hehe Almost no effect at all.

Lychee Cheesecake in a Jar (adapted from Honest Vanilla)

For the lychee cheese layer :

This recipe is enough for 6 jars and a 6-inch springform pan.

1) Break the digestive biscuits and the shortbread by sealing them in a ziplock bag and crushing them using a rolling pin. Make sure you get them quite finely.

2) Pour the crushed biscuits in a bowl, and pour the melted butter over them evenly. Combine both butter and  biscuits are well combined and press them evenly at the bottom of the jars and springform pan. Set and chill in the fridge while preparing the lychee cheese layer.

3) In a small pot, heat the lychee syrup till it just comes to a boil. Take it off the heat and add the gelatine. Stir until it dissolves completely. Set aside to cool.

4) Puree the lychees in a blender until there are less visible chunks. Add the lychee liquor and mix it well.

6) Once it’s well combined and smooth, add the gelatine mixture and fill a piping bag with the lychee cheese mixture. Slowly pipe it into the jars. Pour the rest of the mixture into the springform pan. Set to chill in the fridge for at least 4 hours. (I recommend leaving it in the fridge overnight.)

7) To serve, top it with a bit more buttered crumbs, and a lychee. I added half a strawberry for more crunch and texture! Also, pour 1 tsp of lychee syrup on top just before serving for extra sweetness!

Note to self : Definitely add a little bit more next time! hehe Of course, you can leave it out if you want a kid-friendly version! hehe