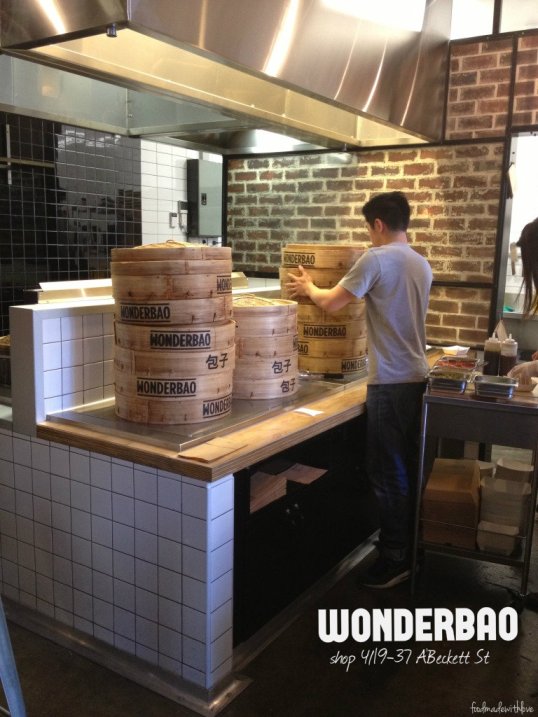 Melbourne. There is a new obsession in town. Buns, hot steaming buns (bao/包) to be exact. I am totally sucked into the fad and loving it! (: I think it’s one thing I love since young. I’m like my dad. We both love baos and till this day when we go for yum cha, char siew baos and salted custard buns would definitely be on the table! Even on Sundays when we do go out, we would come back with his favourite chicken baos. NOMS! Just thinking about it is making me crave for some now!

Of course, since I’ve had baos since I was little I have to admit, my expectations of a good bao is quite high. The dough has to be soft but not too thick and there must be enough filling. I went to meet the mr for lunch in the city in my last week of break so we decided to go give Wonderbao a try! How cute is the name? Love it!

Wonderbao is hidden in a lane under a block of apartments in the city and is a small cosy little shop. I love how they steam the baos in huge steamers and that’s the first thing that greets you when you step into the shop. Because the menu was quite small, the mr and I decided to order one of each bao (besides the sweet ones) to try! It totally looked like we haven’t eaten for days! haha But the staff were really nice, and told us that they would serve half of what we ordered and serve us the other half so that they won’t turn cold! Perfect! (:

I don’t really know what gua bao is. But the buns remind me of those used in the kong ba bao! It’s like a bao made into a U-shape to hold the ingredients! The two gua baos are my favourites of the day! I have a feeling it’s because the filling is fatty pork! (: The first one we had was braised pork belly accompanied by pickled mustard, coriander and crushed peanuts. The pork belly was perfectly cooked and melts in your mouth! The mr and I was beaming after each bite. haha Fatty pork really do make us happy!

The other gua bao was stuffed with roasted pork belly, cucumber, pickled carrots, daikon and hoisin sauce. In our minds, we were expecting crispy crackling with this! So we were a little disappointed when it didn’t. Cause who doesn’t love crackling, right? But the combination was really quite yummy so all was good! (: We still gobbled it down within minutes!

There were 2 big baos offered in the menu. A big pork bun as well as a big chicken bun. They both had a slice of egg and shiitake mushroom in them. The meat was juicy and really tasty! The bao skin is soft and fluffy and besides the top being a little too thick, there was a good proportion of meat to bun!

The chicken bao had a bit more dough and not as much filling. But the chicken was still juicy and yums!

Another of my fav of the day was the choi bao (vegetable bun). It reminded me of the cabbage kueh my mum always buy for me when I’m home. It had shiitake mushrooms, tofu and veggies! Really yums (:

The char siew bao was quite disappointing though I was really hoping it would be better! There was only a thin layer of char siew and sadly the colouring of the char siew was seeping into the bao skin. Though I have to say, the char siew itself was yummy! Would love to have more.

I love chinese sausage. So when I saw this on the menu, I couldn’t wait to try it! Although it was just a sausage wrapped in some dough, I have to say sometimes, simple is best! The mr and I had it and we think the taiwan sausage is handmade cause it’s not the usual size! It was just the right amount of sweetness, and not as much fatty bits! Was really delicious! I could easily have it on it’s own! hehe

After we tried all the baos, we were tempted by the homemade soy milk and bought a cup of cold soy milk each! *slurps!* Really refreshing especially since it was a really hot day that afternoon. I will definitely return for more gua baos and the choi bao! But just note that they are open for breakfast and lunch (Mondays to Fridays) and only lunch on Saturdays!

So, have you been pulled in to the bao trend yet? (: